Montgomery Research Featured on the Cover of HortTechnology: Coffee Does Not Control Cycad Aulacaspis Scale 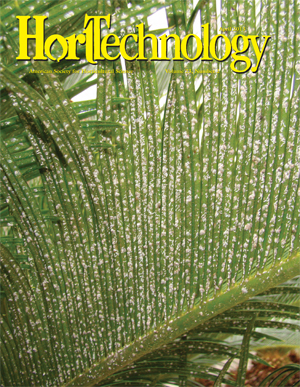 This scale insect, Aulacaspis yasumatsui, is a very destructive pest of cycads. CAS has not only been responsible for killing many of the ornamental Cycas plantings in South Florida, but also threatens Guam’s native cycad species with extinction. Controlling CAS is therefore a high priority for conservation horticulture.

Two sets of rigorous experiments were conducted to evaluate how coffee treatments affect scale infestations. The results show that coffee grounds have no significant effect on CAS. While used grounds may function as a soil conditioner or mulch, they are not effective as a scale control method. Quoting from the paper:

“Despite recent enthusiasm for this recycled resource, spent coffee grounds do not appear to protect cycads from CAS.”

“I began this study to quantify how effectively coffee grounds cleared cycads of CAS. As disappointed as I was to find out that the coffee treatments did not work, it was important to get the information to the public. We learned a few things in this paper: coffee grounds do not affect cycad mortality, so mulching plants with your grounds will not do your plants harm and it still keeps coffee grounds out of landfills; orange and neem oil do cause plant mortality and therefore should not be used on cycads; and coffee grounds did significantly acidify the pH of the soil by the end of the experiment.”

Montgomery thanks John DeMott of Redland Nursery for providing experimental plants and Starbucks Coffee for providing a great volume of spent coffee grounds over the course of the study.