Somewhere in the complex evolutionary pattern between the ferns and seed plants came the cycads, which are tropical and relatives of other cone-bearing (conifer) plants.

Cycads are the survivors of a plant group that was abundant in the Mesozoic flora — the age of dinosaurs — and reached its zenith in the Jurassic Period, some 160 million years ago. Consequently, cycads are often referred to as “living fossils” and “coelacanths of the plant world.” 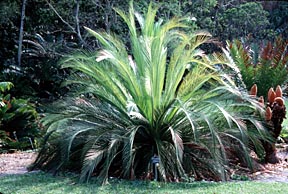 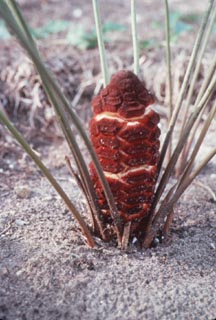 Cycads once had an almost worldwide distribution. Fossils have been found as far north as Alaska, Britain, Greenland, and Siberia and as far south as Antarctica. Today, these plants are confined in nature to limited areas in tropical and subtropical regions around the globe. The present distribution pattern of the ten genera may be due in part to continental drift between 50 and 250 million years ago. The pattern exemplifies the way a group of plants, presumably descended from one common ancestor, underwent a series of genetic changes as a result of geographical isolation and consequential ecological differentiation to give rise to several genera.

Botanists have long been fascinated by this group of plants because cycads represent a living link to a prehistoric time long before the dominance of flowering plants. They are intrigued by the unusual combination of ancestral, derived, and unique features. The layman’s, landscape designer’s, and horticulturist’s fascination with cycads are founded only partially on the antiquity of this plant group. The size, shape, and symmetry of the trunks and foliage provide significant decorative touches to the landscape, while the curious and often colorful cones are an added bonus.

In spite of the scientific and popular interest they engender, cycads remain poorly understood with respect to their evolutionary relationships when compared to other seed plants. Only during the recent years have intensive systematic investigations been undertaken by researchers. Based on reports from our colleagues and our own work, there are still many yet undescribed and unpublished cycad taxa. Also, debate continues on the taxonomic circumscriptions of the presently described species. Today, the group Cycadales includes ten genera of cycads. Ceratozamia, Dioon, Microcycas, and Zamia are confined to the Americas. Stangeria and Encephalartos are found in Africa. Three genera are endemic to Australia: Bowenia, Macrozamia, and Lepidozamia. Australia, Asia, and the South Pacific and Indian Ocean islands contain species within Cycas. Approximately 300 species are recognized within the Cycadales, with new species being found and described on a regular basis as field work intensifies in the unexplored tropical regions of the globe. Montgomery, as the official Program Office of the IUCN/SSC Cycad Specialist Group, maintains a consensus taxonomy of the living species, the World List of Cycads. 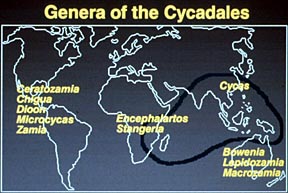