Whether as shrubs, trees, or vines, palms have two methods of growth: solitary or clustered. The common representation is that of a solitary shoot ending in a crown of leaves. Palms may instead grow in sparse or dense clusters. The trunk develops an axillary bud at a leaf node, usually near the base, from which a new shoot emerges. The new shoot, in turn, produces an axillary bud and a clustering habit results. Several palm genera have both solitary and clustering members! Palms which are usually solitary may grow in clusters and vice versa.

Palms have large, evergreen leaves that are either palmately (‘fan-leaved’) or pinnately (‘feather-leaved’) compound and spirally arranged at the top of the stem. The leaves have a tubular sheath at the base that usually splits open on one side at maturity.

Like all monocots, palms do not have the ability to increase the width of a stem via the same kind of vascular cambium found in non-monocot woody plants. This explains the cylindrical shape of the trunk—at an almost constant diameter—that is often seen in palms, unlike ring-forming trees.

The growth habit of a solitary shoot ending in a crown of palmate leaves gave rise to the colloquial term Palm Trees. 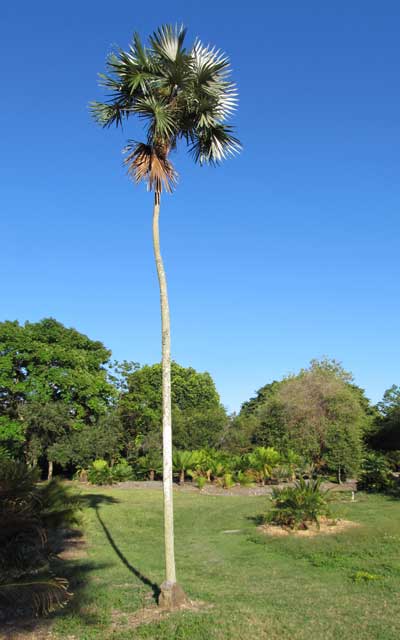 Most palms are native to tropical and subtropical climates. Palms thrive in moist and hot climates but can be found in a variety of different habitats. Their diversity is highest in wet, lowland forests. They can be found around the world, roughly between the 44ºN and 44ºS latitudes, although they have been cultivated outside this area.

The palm branch was a symbol of triumph and victory in pre-Christian times and today, especially the coconut palm, remains a symbol of the tropics.

The palm family (Arecaceae) is economically important, second only to grasses (grains) in importance to the lives of people. Human use of palms is as old or older than human civilization itself, starting with the cultivation of the date palm by Mesopotamians and other Middle Eastern peoples 5000 years or more ago. Modern uses of palms include products like rattan, oil, wax, food, resin, coir fibers, wine and vinegar, as well as ornamental horticulture and landscaping.

Many palms are endangered in the wild, largely because of habitat destruction. Difficult to study because of their large size and great diversity of species, palms present many unanswered questions in the areas of systematics, evolution, structural biology and reproductive biology.