Return to the Dominican Republic: Palms, Conifers, Cycads and More 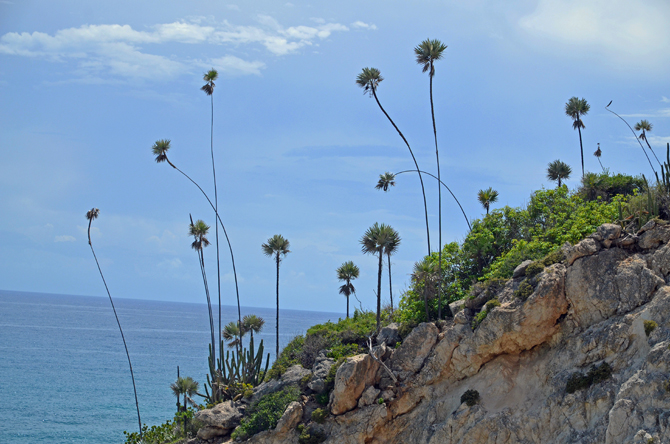 Building on long and fruitful collaborations, MBC once again teamed up with the Jardín Botánico Nacional Dr. Rafael Ma. Moscoso of the Dominican Republic (JBSD) and Fairchild Tropical Botanic Garden (FTBG) to collect a wide diversity of plants in the Dominican Republic for scientific, conservation and ornamental purposes from October 7-17. The expedition was supported by a generous donation of Dr. Lin Lougheed, who also supported the previous expedition in 2012.

The flora of the island of Hispaniola, of which the Dominican Republic comprises two thirds, is very rich and encompasses over 2,000 endemic species. Like South Florida it is part of the Caribbean bio-region, so many Dominican plants will thrive under our conditions.

The expedition team was encouraged to return to the Dominican Republic by Ricardo Garcia, Director General of JBSD. The collecting team consisted of Dr. Chad Husby (Collections Manager and Botanist) of MBC and Jason Lopez (Living Collection Manager) of FTBG who focused on collecting living material, Dr. Brett Jestrow (Herbarium Curator) of FTBG who collected locality data and voucher specimens, Expert botanist Teodoro Clase of JBSD who guided most of the expedition and Alberto Veloz (Herbarium curator) who guided the team to a special palm population. Francisco Jiménez Rodríguez (Botanical Department Director) of JBSD coordinated the visit.

This expedition introduced a new and beautiful palm to MBC’s living collections, Coccothrinax boschiana which grows in a small area where the Sierra Martin Garcia descends into the Caribbean. It is a beautiful species with gold and silver hued leaves and tall flexible stems, which allow it to withstand powerful cyclones that periodically strike the Dominican Republic. Thriving in a hot dry (yet humid) climate on treacherous dogtooth limestone, C. boschiana will be well adapted to thrive at MBC during all seasons.

In addition, the expedition team collected the first documented wild-origin seed of the emblematic Zombia antillarum to be grown in South Florida botanic gardens. Two stately specimens of this very hardy and spiny palm, which were planted in Col. Montgomery’s time, flank the front door to Nell’s House.

The team collected more seeds of the massive Sabal domingensis, which was first introduced to South Florida cultivation by the 2012 expedition to the Dominican Republic. Seeds of Copernicia berteroana were another important palm acquisition. The team also collected seeds of the endemic Dominican cycad, Zamia pumila, from a remote population not currently represented in MBC’s collection.

Of the nearly 100 species collected by the expedition team for their respective gardens, other highlights included the endangered conifer Podocarpus hispaniolensis, which has not been cultivated before. The giant Plumeria, P. magna, is another exciting new introduction to cultivation in South Florida, along with more seedlings of the iconic palm-like Clavija domingensis, which is a major ex-situ propagation success of the JBSD. A new record of a primeval lycopod variety for the Dominican Republic was an important discovery by the expedition team.

Plants collected by the team will provide important scientific and conservation collections for all three institutions. Collecting living material and herbarium vouchers of so many important plants in so little time required each institution to share the expertise and efforts of its staff to the great benefit of all. We look forward to further fruitful collaborations to explore the rich and wonderful flora of the Dominican Republic.