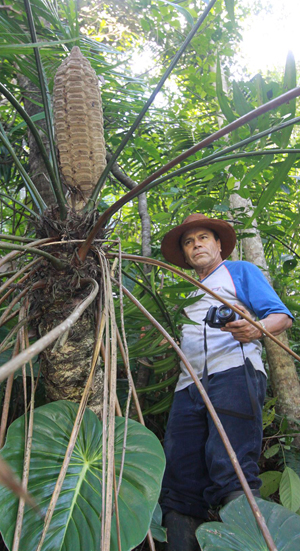 Montgomery begins the New Year with an exciting new discovery — a new species of cycad, Zamia tolimensis, from the “Cordillera Central” mountain range of Colombia. This new species is remarkable for being a large, treelike Zamia — The leaves can be up to 8 feet long, with a trunk over 10 feet tall!

Locally, the plants are known as “palma de yuca”, due to the young stems’ resemblance to the edible tubers of cassava. The team named the new cycad to honor the Department of Tolima, where the species is native.

Some intriguing early specimens hinted at a possible new Zamia yet to be described. Fieldwork in remote areas of the Colombian highlands in 2011 confirmed that the plants from Tolima are a distinct new discovery, easily distinguished from other large South American Zamia species (such as Z. poeppigiana and Z. lindenii).

This is the first cycad species discovered in the highlands of the Central Cordillera of Colombia — the native areas where Z. tolimensis grows are highly inaccessible, perhaps explaining why such an impressive species remained unknown to science until last year. Despite remaining inaccessible to researchers for many years, the plants are considered Critically Endangered due to a high rate of deforestation throughout their native range.

The formal description of Zamia tolimensis can be found in the December 2011 issue of BRITTONIA.