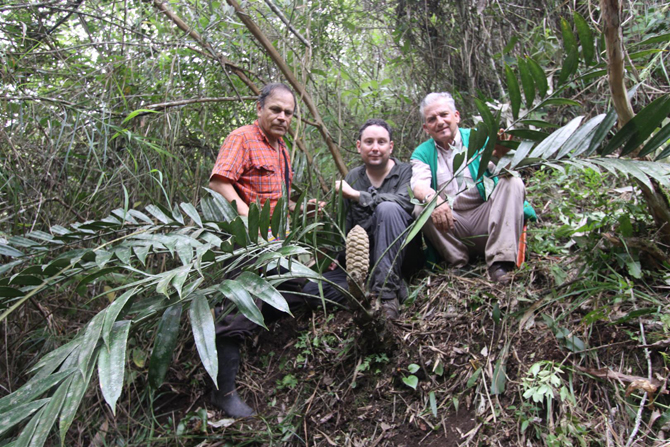 A new species of Zamia from the Eastern Cordillera Mountain Range of Huila, Colombia was recently described by MBC’s cycad biologist Michael Calonje (pictured at center) along with colleagues from the TOLI herbarium (Hector Esquivel, at left), Jardín Botánico José Celestino Mutis (Gustavo Morales, at right), Universidad Surcolombiana, and the New York Botanical Garden. The description was published in the December 2012 issue of Caldasia.

Previous to the recent fieldwork, only three herbarium specimens had ever been collected, the most recent in 1945! Due to the scarce collections, very little was known about the species. Very little was known about the species’ appearance, if it was distinct from previously described species, its habitat, the extent of its distribution, or its conservation status. In fact, it was unclear if this species still existed in the wild!

Supported by a grant from the Association for Zoological Horticulture, the research team set out to scout out the Eastern Cordillera of Huila near the area where the species had last been collected almost 70 years ago. Most of the region where the species had previously been collected was now largely deforested for cattle ranching and agriculture. Fortunately, small remnants of forest surrounding steep ravines and rivers had been spared in order to protect water sources, and the team was able to find healthy, reproductive populations there.

Detailed study in its native habitat verified that this was indeed an undescribed species, and it was named Zamia huilensis to honor the department of Huila where the species is endemic. This species likely remained under the radar for a long time due to intense deforestation in the region combined with lack of fieldwork.

Zamia huilensis has similar reproductive structures to Zamia tolimensis from neighboring Tolima (see story from January 1, below), but leaflets that are more similar to Zamia muricatafrom the Eastern plains of Colombia. It is a much smaller plant than the gigantic Zamia tolimensis and differs in its leaflet shape, whereas it differs from Z. muricata in its habit (arborescent vs. subterranean) and the shape and color of its reproductive structures.

Zamia huilensis is the fourth new species of Zamia described in Colombia in as many years, indicating that even this country with the most known Zamia species may still hold other surprises!