Fieldwork for a rare palm on Mona Island 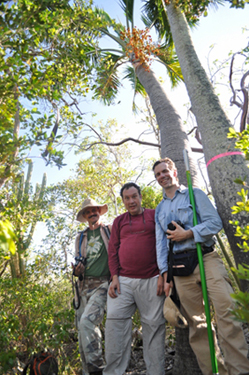 Montgomery Botanical Center and collaborators recently conducted a field project in search of a rare palm on Mona Island.

Pseudophoenix sargentii is found in many places in the Caribbean Basin, including the Florida Keys – where it is known as the Buccaneer Palm. Where it does occur, the populations tend to be small, with only a few palms in each place.

Mona is a remote, uninhabited island halfway between Puerto Rico and the Dominican Republic. Over the years, reports from Mona Island varied. Some counted two dozen Pseudophoenix palms, some claimed fewer – one alarming report claimed only one palm was left!

A grant from the International Palm Society sent four botanists to study and conserve this treasured plant. Patrick Griffith (from MBC) and Javier Francisco-Ortega (FIU and FTBG) teamed up with Eugenio Santiago (Botany Professor at UPR), and Jose Sustache, (DNRA Botanist) for the project.

Over several days of fieldwork, the team thoroughly documented these rare palms on Mona Island – making specimens, detailed notes, and photographs – and collected seeds for conservation. This work can lead to better understanding and protection of other Pseudophoenix populations as well as the Mona Island palms.