Dr. Le Corff, an ecologist from the French Institut National d’Horticulture, AGROCAMPUS-OUEST is being hosted in the Arthur Montgomery Guesthouse while researching with MBC Honorary Member Dr. Carol Horvitz from the University of Miami. France is working on “grenelle de l’environnement”-“greening the environment” and part of the program is decreasing pesticide use by 50%. In France less than 2% of crops are grown organically. France is also the largest user of pesticides in all of Europe. 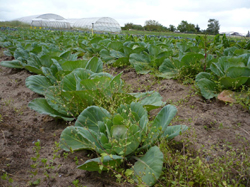 To meet the goal of lowering pesticide use, the French are trying to promote natural enemies of plant pests. From previous work on conservation biological control, it has been shown that landscapes with hedgerows, fallows, and  weeds  usually harbor a higher density and diversity of natural enemies compared to areas dominated by arable land. Predatory insects appear to be attracted to both host weeds and crops in the Brassicaceae.

Dr. Le Corff’s innovative work studies the effects of weeds amongst crops in attracting more predatory insects into the crop ecosystem. This planting system can perhaps alleviate the pressure that pest insects place on the crop plant. Dr. Le Corff presented her findings at the Nixon Smiley Meeting Room to a large audience made up of individuals from the University of Miami, Florida International University, Miami Dade College, The Kampong, the USDA, and Jungle Island.