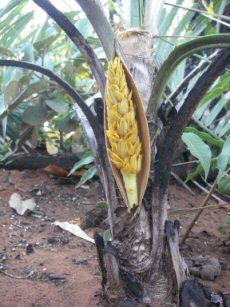 A new species, Syagrus evansiana, was described in the latest issue of Palms, the journal of the International Palm Society. Dr. Larry Noblick, MBC Palm Biologist, named this species in honor of Don Evans, an experienced horticulturist, who originally brought this discovery to Larry’s attention.

Syagrus evanisiana is a nearly-stemless, diminutive palm, which is found in rocky open fields in Minas Gerais, Brazil. This part of the world has seasonal fires, and trees there often have thick, corky bark as protection. In Syagrus evansiana, the stemless habit keeps the palm’s heart safely underground as fire passes over; the crown of leaves may burn off, but can be regrown.

Dr. Noblick has worked extensively in the genus Syagrus and its relatives Butia, Lytocaryum, and Attalea. Larry’s work has discovered many new species, often using the living collections at Montgomery.