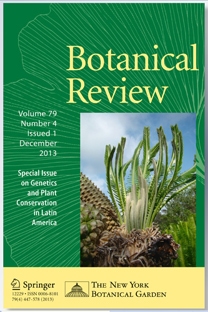 An exciting new issue of Botanical Review features work by Montgomery! The collection of papers here are the proceedings of a symposium on Genetics and Plant Conservation in Latin America, which was chaired by Angelica Cibrian Jaramillo, of Langebio, Mexico.

Among the in-depth reviews in this issue is a paper on the conservation value of botanic garden plant collections, led by Dr. Cibrian Jaramillo and Patrick Griffith.

Angelica was a featured speaker at MBC’s 50th anniversary gathering in 2009. Her discussion with Patrick Griffith and Javier Francisco-Ortega led to the original idea for this symposium. Quoting from the introduction to the issue:

Over the course of that event, discussion among ACJ, JFO, MPG, and DW Stevenson centered on organizing the symposium documented here. These discussions were informed by collaborative projects built in partnership with colleagues in Latin America and the Caribbean. Perhaps reflecting the garden setting where our discussion began, the last paper included here focuses on botanic garden plant collections, a critical and often overlooked component of plant conservation.

The issue features Microcycas calocoma on the cover, as this plant exemplifies both a species of conservation concern in Latin America, and a botanic garden collection of great conservation value.