In 2007, Cédric Pollet spent two weeks at Montgomery Botanical Center.  During his time at MBC, he took thirteen photos that were prominently featured in ten pages of his new book, Écorces: Voyage dans l’intimité des arbres du monde.  Interesting and unusual plant bark is the subject of the book. 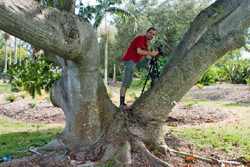 A variety of MBC collections were featured including Bursera simaruba(Gumbo limbo), Sabal mauritiformis, Roystonea regia (Royal Palm), Coccothrinax argentata, and Pseudobombax ellipticum (photo).  The book is an artistic piece that can be appreciated by all.  Published in French, each photograph is also accompanied by the plant’s scientific name.  The photos show a high level of detail of this often overlooked botanical feature.

Cedric’s ongoing projects can be seen at www.artsylva.com.