Montgomery Botanical Center’s 52ndMembers’ Meeting was held Saturday April 2, 2011.  The MBC Board of Directors announced MBC’s new President, Nicholas Kelly.  Charles P. Sacher, the outgoing President, spoke about MBC’s accomplishments during his four years as President and welcomed Mr. Kelly to his new position. MBC elects a new President every four years, in keeping with Founder Nell Montgomery’s wishes. Mr. Nicholas Kelly has served on the MBC Board of Directors since 1996.  He is President of Kelly Tractor. Nicholas Kelly’s father Loyd, served as MBC President in the 1990s. 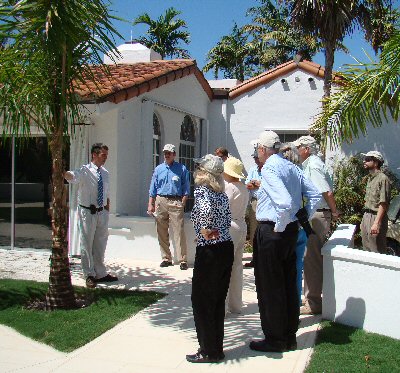 Dr. John Popenoe resigned as Director, but retains his board-designated title of MBC Botanical Consultant. The Board elected John’s daughter Dr. Juanita Popenoe, extension faculty for regional commercial horticulture from the University of Florida to serve as Director.  Dr. Juanita Popenoe grew up on the MBC landsite and has extensive experience with the land and plant collections at MBC.  Her horticultural expertise brings an important perspective to the Board.  Please join MBC in welcoming her.

Reports were made by Secretary-Treasurer Walter Haynes and Executive Director Patrick Griffith. The Marion and Tex Haynes Patio was also dedicated at the meeting. Please see the news item above for an account of this important dedication.

A lecture was presented by Dr. Barbara Whitlock from the University of Miami, titled, “Re-illuminating the Swingle Plant Anatomy Reference Collection.”  She described salvaging Walter Tennison Swingle’s plant anatomy collection, just prior to it being thrown out.  She also discussed making it digitally available, to reach a broad group of users.  Dr. Swingle was an expert in citrus trees and Dr. Whitlock is currently using the Swingle Collection to answer more hypotheses about that plant family.