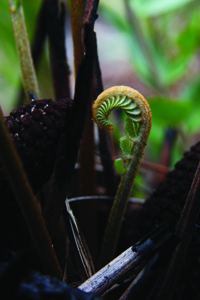 The MBC Team has some exciting news – Cycads share some important root features with much more “modern” flowering plants.

The new paper, appearing in the latest issue of the American Journal of Botany, demonstrates that cycads use the same method of root contraction – gelatinous fibers – as Gnetum, Ficus, and plants from other families. Especially in young plants, contracting roots can help protect the important growing tip, by holding it close to the soil level until it is large enough to withstand hazards. For example, the photo here shows a young Zamia from northern Florida recovering after a wildfire.

Although root contraction has been known in cycads, no one had yet demonstrated how this occurred. Through careful anatomical examination, Barry Tomlinson and his coauthors Tracy Magellan and Patrick Griffith saw that the collapsed soft tissues in cycad roots were not the cause of contraction, but rather the effect. Gelatinous contractile fibers exert the force needed to contract the young plants – just the same as on the roots of a Banyan Tree.

The finding here suggests that the adaptation of gelatinous fibers may be quite ancient – if these fibers appear in both cycads and flowering plants they may have originated in an era much older than previously thought.

“Working with Dr. Griffith and Dr. Tomlinson is great fun,” said Tracy Magellan, corresponding author on the study. “Dr. Tomlinson is a brilliant anatomist with an eye for similarities and differences amongst many plant families. Having Dr. Tomlinson survey and study the diverse plant collections at Montgomery made this research possible.” The authors now joke that they have shown that, “Cycas is like Ficus.”

The MBC team is very grateful to the Kelly Foundation, which funded this project through the Kelly Botanical Research Fellows Program.