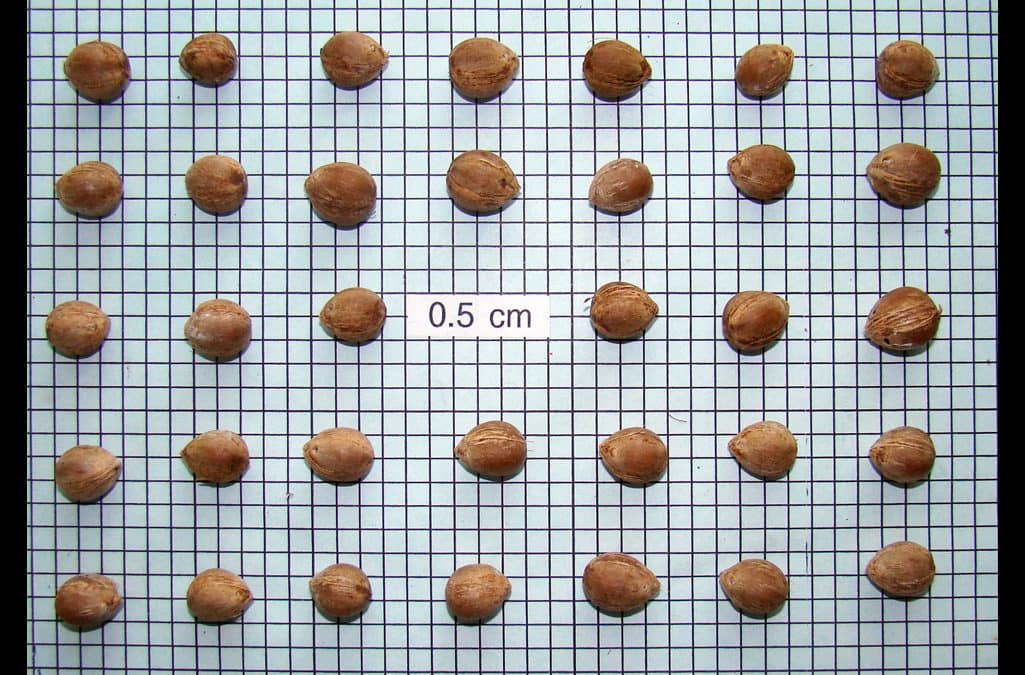 Seeds, Seeds, and More Seeds: The History of the MBC/FNGLA Seedbank Program at the Montgomery Botanical Center

In March of 1999, the Miami-Dade Chapter of the Florida Nursery, Growers and Landscape Association (FNGLA) and Montgomery Botanical Center (MBC) celebrated the one-year anniversary of their joint Seedbank Program. Under clear skies and a magnificent full moon, staff and members of both organizations held a poolside reception at MBC to acknowledge and thank all individuals involved with the first year of the program, to educate other FNGLA members about the program, and to invite new members to join.

The original concept for the Seedbank Program was first developed by John DeMott of Redland Nursery, a close friend and strong supporter of MBC. John would often visit the 120-acre MBC property, bringing with him a donation of a rare or unusual palm. During his mid-1990s visits, John and I typically took a golf cart tour through the palm and cycad collections. As we traveled around the property, John would comment on the extremely large number of seeds laying at the base of MBC’s older palms. Being a typical horticulturist and nursery grower, John could not stand the sight of seeds going to waste because they were not being collected for propagation.

During our tours together, I would reiterate to John the purpose and goals of Montgomery Botanical Center, as well as discussing the priorities of our limited resources. When Eleanor Foster Montgomery Jennings passed away in June of 1990, she left her estate and funds to support scientific activities at MBC. In Nell’s 1989 will, she stated that she wanted to encourage the scientific and educational study of the plants growing on the property. Since 1991, MBC Directors have focused available funding towards the development of an international scientific collection of tropical plants, with an emphasis on palms and cycads. (Colonel Robert Montgomery who developed the original estate with Nell, planted primarily palms and cycads in their collection.) With a Master Site Plan developed for the 120-acre property in 1992, the Directors initiated the use of available funds for developing a collection that would attract educators and students and would encourage and support scientific research projects on the plants.

When I became the Executive Director of MBC in November of 1994, I worked to ensure that the collections were being developed as Nell had wished. The staff at MBC began mounting expeditions throughout the world to collect scientifically-valuable material for future studies. Hundreds of seeds were obtained and germinated in MBC’s Nursery Complex. In 1996, MBC’s horticulturists began planting according to a detailed landscape design and the Master Site Plan. However, with limited resources, the majority of funds were directed to obtaining seeds from wild populations, germinating them in the nursery, and planting the young plants on the 120-acre property.

I informed John that because of our primary goal to develop a scientifically-based collection, I could not make seed collecting from our mature plants a priority item when it came to allocation of available resources. Although he understood, John continued to be frustrated by all of those seeds decomposing on the ground.

In 1996, with support from an outstanding group of volunteers, MBC began hand-pollinating some of our rare and unusual palms and cycads on the property, such as Microcycas calocoma, Zombia antillarium, and Nypa fruiticans. The resulting seeds were distributed to botanical gardens, plant societies, and institutions worldwide. From 1995 through 1998, we distributed annually between 5,000 and 9,000 seeds produced from our controlled pollinations. However, MBC staff were only able to allocate minimal time to overseeing this seed production and distribution.

In 1997, after months of listening to my reasons about why all those seeds on the ground were not being harvested, John suggested that FNGLA and MBC could possibly develop a cooperative program to support the collection and distribution of those seeds. Each time John visited, he again suggested this possibility more clearly; defining what such a program might entail as time went on. In July, he asked if I would submit a proposal to the Miami-Dade Chapter of the FNGLA to support a seedbank program. In August, a proposal was submitted to the Chapter’s Directors stating the following objectives:

An essential part of the MBC proposal was the hiring of a part-time seedbank coordinator to oversee the collecting, cleaning, and distribution of seed to FNGLA and to other botanically-oriented societies, gardens, and institutions.

John discussed the proposal with Murray Corman of Garden of Delights to see if he might be interested in supporting such a program. Since the mid 1970s Murray had been trying to figure out ways to increase the diversity of species available to the South Florida Nursery Industry. The MBC proposal was exactly what Murray had hoped for. Murray immediately signed on with John as a strong supporter of the program and became one of the first members of the new FNGLA Seed Bank Committee.

Many months were spent developing a Memorandum of Understanding (MOU) between FNGLA and MBC. Since so many individuals were involved in one or more aspects of the agreement, many drafts were generated. Members of FNGLA were canvassed to see if they would be interested in purchasing shares in the program; the higher dollar amount a share-holder gave to the program, the larger number of seeds they would obtain.

On March 25, 1998, the MOU between MBC and FNGLA was officially signed. The main purpose of the agreement was that the two organizations would create and administer a seedbank program with the objectives stated above. The program began on April 1, 1998. Thirteen individuals purchased shares in the program to fund the first year. These individuals ultimately became the MBC/FNGLA Seedbank Committee. The MOU stated that FNGLA would receive 60% of the seeds generated through the program. Twenty percent of the FNGLA seeds would be sold to FNGLA members during the monthly meetings; the funds from the sale would be split equally between FNGLA and MBC. Eighty percent of FNGLA’s seeds would be distributed to the Seed Bank Share Holders based on the number of shares they held in the program.

In April 1998, Judy Kay, a volunteer at MBC already involved with controlled pollinations and seed distributions, was hired as the part-time Seed Bank Coordinator through the MBC/FNGLA Seedbank Program. MBC renovated a small building to house the office of the Coordinator and to provide a site for processing, storing, and distributing seeds. Murray Corman agreed to support the Program by working with Judy Kay once very two weeks. With a priority listing of species wanted by FNGLA, Judy and Murray spent every other Friday harvesting seed from Montgomery’s collections. Later in the year, Murray was kind enough to accept a seed cleaning/consultant position through MBC. His responsibilities were to support Judy with identifying which seeds to collect, when to collect the seeds, and how to collect them. He also cleaned the seeds at his nursery, returning them to Judy on a timely basis for processing and distribution. These days, one can often see Judy and Murray out together in Murray’s truck harvesting seeds for future distribution. Murray’s commitment to the program has supported the success of the program.

Throughout the remainder of 1998, the Seedbank Committee met on a regular basis at MBC to discuss issues that arose as the program continued to evolve. The issues were not surprising, since anyone involved with seed distribution knows that there are always logistical problems associated with harvesting, processing, storing, and distributing seeds. By the end of 1998, John DeMott accepted the volunteer position as the liaison between MBC and FNGLA.

With the financial support of FNGLA, MBC was able to harvest over 176,000 seeds from the collection during 1998. Over 145,000 of these seeds, which represented more than 75 taxa (species, varieties, and cultivars), were distributed to FNGLA from April 1 through December 31, 1998. It is important to note that by the end of 1997, MBC had only distributed around 9,000 seeds with its own available resources. Already, during the first two months of 1999, more than 75,000 seeds were distributed to FNGLA from MBC’s collections thanks mainly to Judy’s, Murray’s, and John’s efforts.

Because of the development and success of the Seedbank Program, MBC is now able to support and distribute large numbers of seeds to other institutions, botanical gardens, and plant societies throughout the world. FNGLA is to be commended for supporting an activity with important global impact.

As the first year of the Seed Bank Cooperative Program comes to a close, FNGLA and MBC are now poised to begin year two. In December of 1998, a funding proposal from MBC was submitted to FNGLA; it was accepted, providing the necessary funds to support the 1999/2000 Seedbank Program. Judy Kay will continue in her capacity as Seed Bank Coordinator and Murray Corman will continue as MBC’s Seedbank Consultant for seed collecting and cleaning.

As the young, recently planted collections mature at MBC, more and more seeds will be produced for harvesting and propagation. We hope that by the year 2000, Seedbank Program funds will be available for a full-time individual to oversee the program. Ultimately, the program should continue to be self-sustaining, as well as bringing in additional funds to both organizations so that the maximum number of quality seeds can be distributed.

John DeMott’s original suggestion to develop the program has met all of our expectations thanks to the efforts of the Seedbank Committee and Judy Kay. MBC is extremely proud of the success of the program and would like to thank the Miami-Dade Chapter of the FNGLA for its commitment. There are thirteen FNGLA Members, the original members of the Seedbank Committee, who should be acknowledged for their perseverance during the first year to ensure the success of the MBC/FNGLA Seedbank Program.

How to Hand-pollinate a Cycad 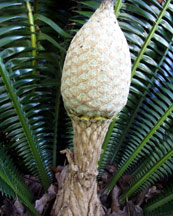 Pry open the top of receptive cone with your fingers.

Center piece should pop out leaving a large hole on top of cone.

Mix pollen with water until it has an opaque or watery appearance. Pour pollen solution into hole on top of cone. If receptive, the solution will pass through the entire cone and drip out the bottom openings. 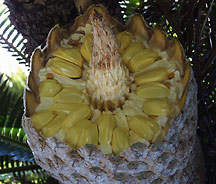