Belize is home to a rich cycad flora, with five native species in an area the size of New Hampshire.  Two of these species, Zamia decumbens and Zamia meermanii, both endemic to Belize, were described by MBC Cycad Biologist Michael Calonje based on extensive fieldwork in 2008 assisted by MBC Executive Director Dr. Patrick Griffith, and Jan Meerman.

In remote sinkholes in the Maya Mountains, two key populations of Z. decumbens  were sampled for assessment of their genetic diversity.  The plants were also measured and labeled for long-term population monitoring.  The team collected seeds of Z. decumbens and Z. meermanii for conservation horticulture at Belize Botanic Gardens and Montgomery.  In addition, seeds of several rainforest palms were collected, including Calyptrogyne ghiesbreghtiana, Reinhardtia gracilis, and Chamaedorea geonomiformis.

Chad states:  “The success of this fieldwork resulted from the effective collaboration of many colleagues.  Despite the short time-frame, all the goals of the trip and more were accomplished, resulting in gathering of key scientific data and very important conservation collections.” 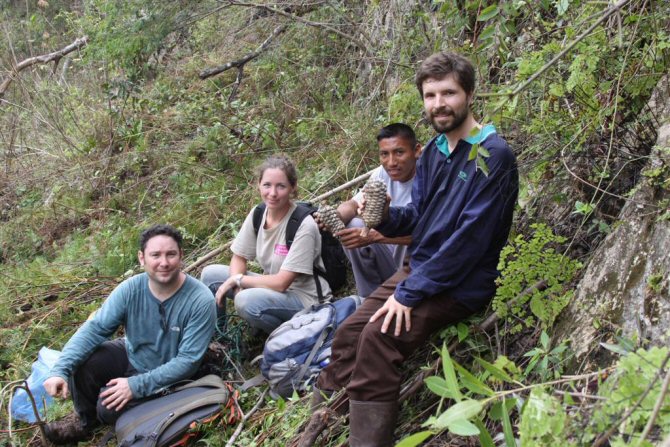