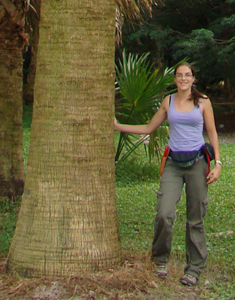 Angela Cano has returned to Montgomery to continue her studies of palm diversity and evolution. She was last here in 2010 while completing her Masters Degree from the Conservatoire et Jardin botaniques de la Ville de Genève, in Switzerland. Previously at Montgomery, she collected specimens of Trithrinax, and her research on that palm genus was recently published and featured on the cover of Phytotaxa.

Angela spent a week at Montgomery collecting palms, and also visiting the FTG Herbarium and collecting at Fairchild. Angela states: “I had a wonderful time in Montgomery and I was able to collect everything I wanted to. The collection is very impressive and the way it is curated and organized is impeccable. It is a real pleasure to work in Montgomery.” Angela next continues her travels to Panama, where she will perform further fieldwork.