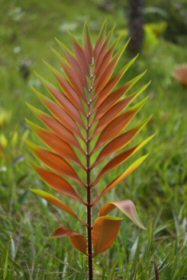 Zamia pyrophylla, a new cycad species from the lowland tropics of Colombia, was recently described in the journal Brittonia. The new cycad is visually striking — the research team writes: “The specific epithet refers to the glowing orange and red emergent leaves, which progressively turn green from the apex to the base, giving them a fiery appearance.”

This new description resulted from extensive fieldwork led by the Universidad Tecnológica del Chocó (UTCH) in collaboration with MBC. Yan Arley Ramos, Director of the CHOCO Herbarium, coordinated the fieldwork in which several students and alumni of UTCH also participated.

Intensive study by the team of five populations of this Zamia confirmed that this species which was previously considered a synonym of Zamia amazonum, was indeed a distinct, undescribed species.

This plant occurs within a narrow geographical range in the department of Chocó, where it is currently threatened by habitat destruction. Based on census of the plants and field observations, the project team has recommended that Zamia pyrophylla be listed as Critically Endangered, following the internationally-recognized criteria of the IUCN. 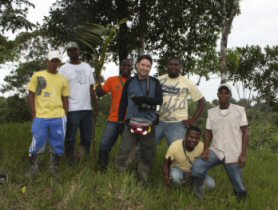 The new species description is the result of a broad multi-institutional collaboration, led by Michael Calonje of MBC, and including Claudia Calonje (MBC), Yan Arley Ramos (CHOCO), and Dennis Stevenson (The New York Botanical Garden). Anders Lindstrom also contributed to the effort. Financial and logistical support from Francois and Angela Dolmetsch and the Zane B. Carothers Memorial Fund enabled the fieldwork.

Michael states, “perhaps the most rewarding aspect of this collaborative research trip for me was the interest awakened among UTCH students in conducting further research with this species as well as other cycads native to Chocó. We look forward to future collaborative work between MBC, UTCH, and the CHOCO herbarium.”