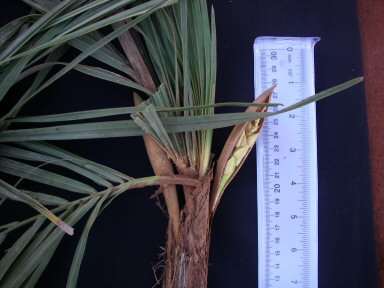 Dr. Larry Noblick, MBC Palm Biologist, is working on an extensive review of Syagrus and closely related palms. Over the course of extensive fieldwork, herbarium study, and study of living collections at MBC and elsewhere, in collaboration with Harri Lorenzi of the Instituto Plantarum (Brazil), Dr. Noblick determined that reassessment of the diversity in these palms was needed.

The current issue of the journal Palms (Volume 54) features two papers by Noblick and Lorenzi, covering the genera Syagrus and Lytocaryum. Fourteen new Syagrus species are described, as well a single new species of Lytocaryum.

The new Syagrus discoveries include some palms with conspicuous trunks, as well as a large number of stemless palms native to the cerrado and savanna habitats of South America. The authors write: “Several of the species described below could be used in landscaping and the smaller ones would be particularly valuable in the landscaping of small rock gardens. Many of the higher altitude species are probably frost resistant.”

These stemless savannah palms are an area of expertise for Dr. Noblick, who previously described Butia exospadix and Butia marmorii, two palms that mimic grasses in habit. Syagrus minor, one of the new species in the recent work, is likely the most diminutive Syagrus known.

The other new discovery, Lytocaryum itapebiensis, is a stemless palm of the rainforest understory. Noblick and Lorenzi have recommended that this palm be classified as Critically Endangered, as “the only known population is extremely threatened with only about 20-25 plants left in the wild.” The authors see great potential for ex situ conservation of this attractive palm.

Palms, the quarterly journal of the International Palm Society, features a selection of original papers in the diversity, uses, and ecology of the palm family, as well as a regular section devoted to the horticulture of palms.