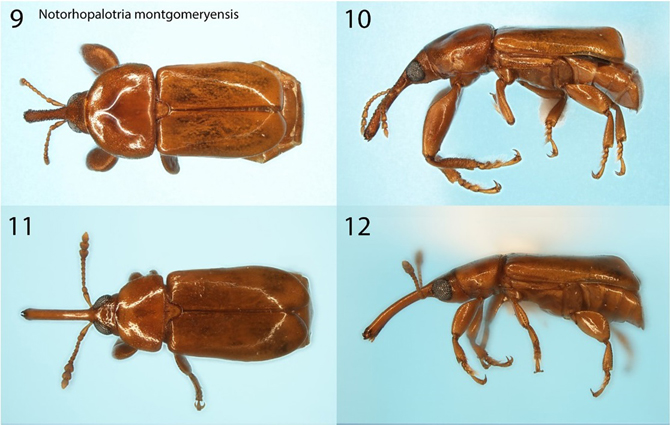 Notorhopalotria montgomeryensis, known only from Costa Rica and Panama, honors MBC’s longtime work with cycads. Quoting the authors, “This species is named in honor of the Montgomery Botanical Center in Florida for its support of cycad research and conservation in the Caribbean and Central America.” The Montgomery Weevil pollinates and feeds on two cycad species, Zamia pseudomonticola and Zamia fairchildiana.

Rhopalotria calonjei is named for MBC’s longtime cycad biologist: “This species is named in honor of Michael Calonje for his work in collecting the type series of this species and many more specimens used herein, in addition to his contributions to Zamia taxonomy.” Calonje’s Weevil is only found on Zamia decumbens, the Sinkhole Cycad, in a limited area of the Maya Mountains. Michael’s work, in collaboration with experts in Belize, led to the description of that cycad in 2009.

Both species are included in a very large-scale new revision of the cycad weevils, which involved extensive field surveys, museum study, and detailed photography and microscopy. The monograph is published in Zootaxa (Volume 3970: 1-87).