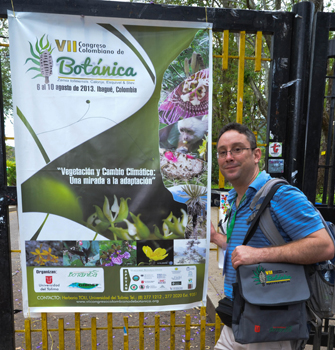 Montgomery’s staff, members, research fellows and colleagues were well represented at the VII Congreso Colombiana de Botánica (Colombian Botanical Congress), held this past week at the Universidad del Tolima in Ibagué, Colombia. The Congress was coordinated by Hector Esquivel, long-time MBC collaborator and Director of the TOLI herbarium and the Alexander von Humboldt Botanical Garden of the Universidad del Tolima.

Michael Calonje and Dennis Stevenson organized a symposium on Systematics and Conservation of Neotropical Gymnosperms, which featured talks by Michael and Dennis, as well as Hector Esquivel, Cristina Lopez-Gallego, and Chad Husby. The session covered cycads, conifers, and gnetophytes, with an emphasis on the Colombian species. Michael states, “The gymnosperm symposium included talks about the major gymnosperm groups and provided a good balance of topics including conservation, taxonomy, phylogenetics and ecology. I was happy to see that the sessions were very well-attended and the talks generated a lot of interest among the attendees.”

The theme of the conference was looking at adaptation of vegetation in response to climate change, and included over 200 speakers from many different areas of botanical study.

Michael and Chad were also honored to attend a dinner meeting of the Association of Botanic Garden Directors of Colombia. Chad observes: “It was a great honor to join the Botanical Garden Directors of Colombia and learn of the important and exciting work being done by their gardens. The Directors likewise showed great interest in the work of MBC. We made important connections with colleagues that create opportunities for future collaboration.”