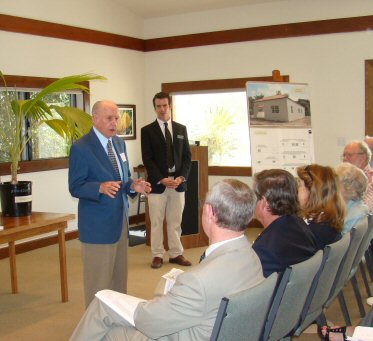 Montgomery Botanical Center’s 51st Members Meeting was held on March 27. The MBC leadership offered updates on the previous year’s work, and plans for the coming year.

The Members Lecture was given by Dr. Alan Meerow of Chapman Field, who presented an engaging lecture titled: Princes, Kings, and Queens: Palm and Cycad research at USDA and MBC. Alan spoke about the history of Chapman Field, and the ongoing collaborative work being performed in connection with MBC staff.

Dr. David Lee of Florida International University offered positive remarks on the quality of recent work at MBC, especially regarding cooperative efforts. David stated his view that “good will does not come out in the statistics, but is very important, and MBC is creating much good will in Miami’s botanical community”

A highlight of the Members Meeting was the honoring of Loyd Kelly for his dedicated service.  The MBC Board of Directors unanimously elected to give Loyd the title of Director Emeritus, to honor his leadership and service on the Board, especially as President during the important formative years following Nell’s death in 1990.

Dr. Patrick Griffith thanked Loyd for his guidance, leadership, and steadfast support of Montgomery, especially in the core mission areas of research and education. Patrick then presented Loyd with three framed drawings on behalf of the MBC team. These drawings are the original botanical illustrations of Syagrus kellyana, the Kelly Palm. 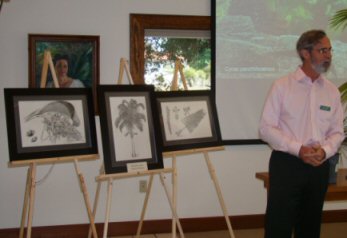 Dr. Larry Noblick recently named this palm species after Loyd Kelly. Quoting from the formal description, the new species “honors Loyd Kelly and his family who have so generously supported the Montgomery Botanical Center and my research over the years.” Larry spoke of his discovery of the Kelly Palm, and his recollections of being hired by Loyd as MBC’s first palm biologist.

Charles P. Sacher, MBC President, then offered gratitude on behalf of the Board for Loyd’s dedicated leadership and service, noting that Loyd’s organizational efforts laid the framework for Montgomery’s current successes.

Loyd then shared his thoughts on MBC and his vision for leadership, stating, “In leading this organization, I always believed in a good, rigorous selection process for the people that we bring in. I believe that we should bring in good people, set parameters on what we want to see, and then stand back and let the people do good work. Our successes here come from that philosophy, and I am glad to see all the good work being continued by our group here at Montgomery.”