Dr. John Dowe, Montgomery Botanical Research Fellow, presented a lecture on the Palms of the Wet Tropics Bioregion of Australia, on July 17. 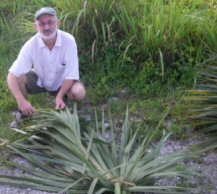 Although Australia is the driest continent on earth, with an average continent-wide rainfall of only 165 mm (6”), there are some areas that receive relatively large amounts of rainfall annually because of topographical characteristics. These areas are often biodiversity hotspots. The ‘Wet Tropics Bioregion’ is situated on the north-east coast of Queensland, centred on 16° S latitude, and the annual rainfall ranges from 1600 mm (63”) to 7000 mm (276”). Although the WTB covers only 4.2% of Australia’s land surface area, it contains about 17% of the continent’s floristic diversity. Some 24 palms species occur in the WTB: of these 10 are endemic to the Bioregion. Dr. Dowe’s presentation discussed the biophysical factors that control the environment in the WTB, and examined the identification, distribution and ecology of the 24 palm species occurring there.