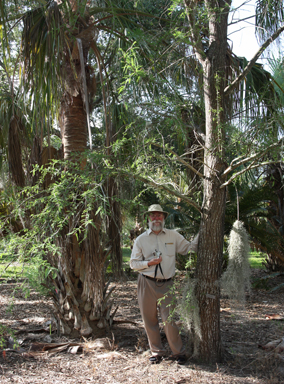 On May 4th, MBC hosted a seminar by Dr. James Eckenwalder, entitled “Rethinking Conifers”.  Dr. Eckenwalder is Associate Professor of Ecology and Evolutionary Biology at the University of Toronto and his studies focus on systematics of gymnosperms, poplars and Convolvulaceae (morning glories).  In 2009, Dr. Eckenwalder published the first modern comprehensive taxonomic treatment of the world’s conifers, entitled “Conifers of the World.”

From April 29 to May 5, Dr. Eckenwalder has been exploring warm climate conifer collections in Georgia and Florida.  Montgomery Botanical Center was the final leg of his trip and allowed him to study the rapidly growing tropical conifer collection on the property, which now constitutes over 200 species (ca. 30% of the world’s conifers).

Dr. Eckenwalder’s career began on the MBC property, where he worked as a taxonomist for Fairchild Tropical Garden from 1977-1978 and stayed in the apartment of the Fairchild research building.  During his time in South Florida, Dr. Eckenwalder donated to MBC several plants he collected of the Montezuma Bald Cypress, Taxodium mucronatum, the national tree of Mexico, that he collected in the wild in Durango, Mexico, in 1974.  Of these original plants, one has survived to the present day and graces the conifer collection at MBC (see photo).

During his seminar, Dr. Eckenwalder presented an overview of the diverse forms of the world’s conifer and emphasized that there is no such thing as a “typical conifer”.  In addition, he highlighted the many things that remain to be learned about conifers.  Despite the intensive study of northern timber species, many of the world’s conifers have received little attention, especially in tropical regions.  Although there are relatively few species of conifers remaining on earth (545 by Eckenwalder’s reckoning), new species are being described on a regular basis.  Much remains to be learned about the ecology and physiology of conifers, including how they will perform in different regions.

The conifer collection at MBC is providing a laboratory for discovering which species are best adapted to South Florida.  This continues the tradition of Col. Robert Montgomery’s early conifer trials at MBC in the late 1930’s and Dr. John Popenoe’s conifer plantings in the 1970’s.  During his visit, Dr. Eckenwalder noted the importance of diverse living collections, such as those at MBC, for better understanding conifers.