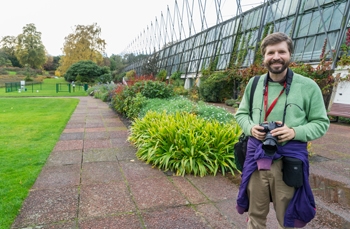 Conifers are the second most threatened major group of plants after cycads: 34% of species are threatened with extinction. Ex situ conservation effortsare an important part of comprehensive conservation strategies for these ancient plants. For the past eight years, MBC has been actively expanding its tropical conifer collection. As part of this effort, from October 17 to November 4, Dr. Chad Husby exchanged tropical conifer propagules with botanical gardens in the United Kingdom, Germany and the Czech Republic. The trip was sponsored by a Jean Iseli Memorial Grant of the American Conifer Society and is part of ongoing collaborations with the Atlanta Botanical Garden (ABG) to expand and improve tropical conifer conservation collections in the US.

Cuttings of many conifers were collected, totaling more than 60 accessions of almost all wild origin tropical conifers, mostly from the family Podocarpaceae. Among the many noteworthy collections are two new species of Podocarpus from the Solomon Islands collected by Martin Gardner and described by Dr. Robert Mill of the ICCP. Montgomery Botanical Center represents an important ‘safe site’ of the ICCP. Our tropical climate allows RBGE’s tropical conifers to reach maturity (which is often not feasible in a glasshouse) so that their reproductive biology can be studied. 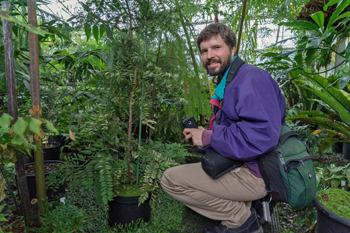 The expedition began in Dortmund, Germany, where longtime MBC collaborator, conifer expert Dr. Patrick Knopf, is now director of the Rombergpark Botanical Garden. Dr. Knopf hosted Chad and provided cuttings from his research and conservation collections. Chad also gave a public lecture on MBC’s work at the Rombergpark Botanical Garden. Dr. Knopf and Chad also traveled to the Prague Botanical Garden to meet with Dr. Vlastik Rybka and Romana Rybková, who were recently hosted at MBC, to explore the gardens and collect conifer propagation material. Chad then departed for the United Kingdom where he spent a day with Daniel Luscombe, Assistant Curator of the Bedgebury National Pinetum and Forest, a key ICCP ‘safe site’ which has a very large conservation collection of temperate conifers. Afterwards, Chad spent a week at RBGE studying the tropical collections and collecting conifer propagation material with the help of Glasshouse & Quarantine Manager Fiona Inches and head horticulturist Andrew Ensoll. The propagation material arrived in good condition and propagation efforts are being shared between MBC and ABG, in emulation of successful conifer exchanges with RBGE in 2007 and 2008. This represents a significant enhancement of conifer collections at MBC and in North America and shows how much can be accomplished in a short time when botanical gardens work together in the interests of ex situ plant conservation.