The book ‘Australian Palms: Biogeography, Ecology and Systematics,’ written by MBC Fellow, Dr. John Leslie Dowe, of James Cook University, Queensland, Australia, has been published by CSIRO Publishing. With over 300 pages and with 320 color photos, it is an updated and completely revised account dealing with the 60 palm species that are indigenous to Australia and its off-shore territories. The only other publication that has seriously dealt with the Australian palms in areas such as biogeography and classification was published over 130 years ago, in 1875, by the German botanists Hermann Wendland and Oscar Drude. Although the Australian palms have been studied at the generic and species level relatively intensely in recent decades by a number of botanists, a floristic and systematic account treating the entire Australian palm flora has not been available until now. 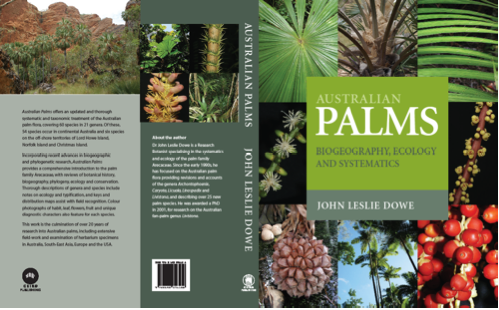 Commencing with the Hurricane Andrew Rehabilitation program in the mid 1990s, Dr. Dowe has had a long association with MBC. During that program, he engaged in extensive field-work in Australia collecting seeds and herbarium materials of the Australian palm species that had been lost or otherwise depleted as a result of Hurricane Andrew. In the course of the program and in subsequent field-work, Dr. Dowe has visited every mainland Australian palm species in its natural habitat, gathering seeds for MBC, and herbarium specimens and descriptive data that ultimately contributed toward the research on which the new book was based. During his botanical career, he has described nine new taxa of Australian palms, complementing his descriptions of 19 new species in the south-west Pacific and New Guinea. 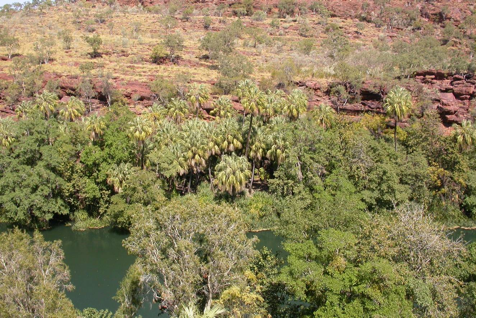 One of the remote Australian palm populations visited by Dr. Dowe during his research involving the Australian palms: Livistona rigida in the spectacular Lawn Hill Gorge, provides a green oasis in the semi-arid monsoonal area of north-western Queensland.

Dr. Dowe has been an MBC Fellow since 2005, and has visited MBC on a yearly basis since then. As well as using the MBC living collection of Australian palms for additional research materials for the book, Dr. Dowe has collaborated with Dr. Patrick Griffith and Dr. Larry Noblick on a number of projects, primarily involving the impacts of hurricanes on palms and presently on the morphological variation in Sabal palmetto in Florida. 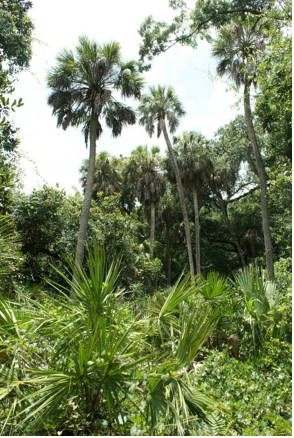 Sabal palmetto at Werner-Boyce Salt Spring State Park, Pasco County, Florida, one of the 15 populations that was studied in the leaf morphology research project in collaboration with Dr. Larry Noblick.

The supplementary data consist of lists of about 1650 herbarium specimens that were examined in the course of compiling species descriptions and formulating ecological and distributional data for the Australian Palms book. The data are included in two files: File 1 includes the specimens arranged by genus and species in alphabetical order. The lists tabulate data on collector, collector’s number, date, location, herbaria, and publication information about currently used names and synonyms. Please note that dates are in this order, yyyymmdd, and that altitudinal measurements are in meters. Herbarium acronyms and other abbreviations, used in these lists, are explained in the Glossary in the book.